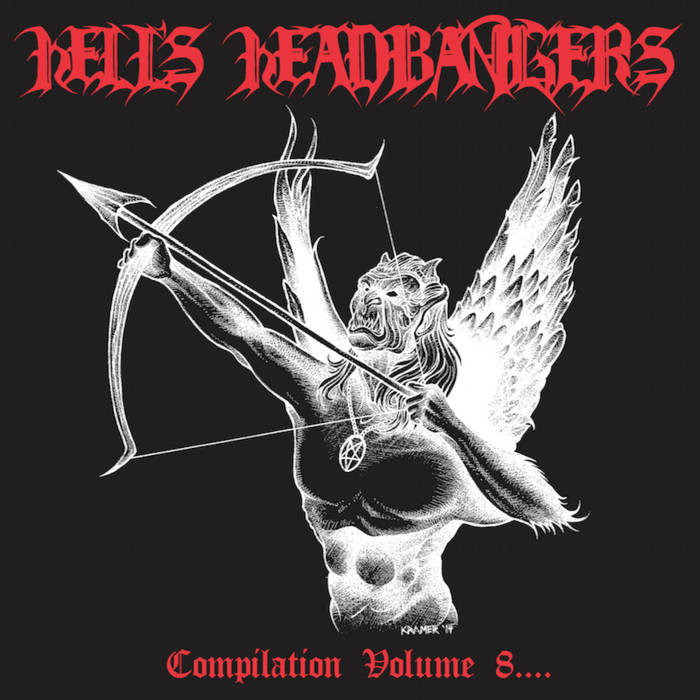 Andrej Romić Love this label. It has some really great obscure and dark death/black/thrash bands on it's roster. Give this compilation a listen. Favorite track: The Ultimate Climax of Darkness.

FREE STICKER OF THE COMPILATION ARTWORK IN EVERY MERCH ORDER AT WWW.HELLSHEADBANGERS.COM WHILE SUPPLIES LAST!

The cover art, hand-drawn by Antichrist Kramer (Inquisition, Vasaeleth, et al), is clearly a homage to BLASPHEMY's "Fallen Angel of Doom." T-shirts and Hoods featuring the cover art will be available in April.

WORDS FROM THE ARTIST:
"This Compilation artwork, moreso than any others that I have created before this, serves as a tribute to not just a "classic" and "legendary" album, but my personal and homage and Hail to the Hooded Desecrator
Demons of Ross Bay Cemetery: BLASPHEMY. I have known the band on a personal level, and have been friends with, since the year 2000, but my support and allegiance goes all the way back to the year 1991 when I
stumbled across the release of the album that is being paid tribute to here on this compilation. One of the most
devastating, destructive and truly EVIL Black Metal albums in the history of the genre: "Fallen Angel Of Doom….".

To pay tribute to this legendary and MONUMENTAL release, all tribute artwork (Archer, Desecrator Demon, HHR logo) was created line by line, dot by dot and letter by letter as close to the original release as is possible, to make one not only SEE the tribute and homage being paid to not only this release, but the band itself, but to FEEL the energy that I felt while listening to BLASPHEMY these last 24 years. HAIL THE BLACK METAL SKINHEADS ETERNAL………"
- ANTICHRIST KRAMER, 2015

Bandcamp Daily  your guide to the world of Bandcamp